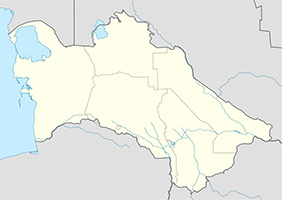 Geography
Turkmenistan is located in the southwest of Central Asia and has access to Caspian sea on the west. Amu Darya river flows on the east, on the south and southwest the republic is locked by Kopetdag and Paropamiz mountains. Waterless desert Kara Kum occupies 80 % of country territory. Only 3 % of land irrigated from Kara Kum channel is fertile. Turkmenistan borders on Kazakhstan and Uzbekistan on the north, Iran and Afghanistan -on the south and southeast.