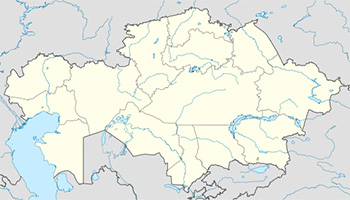 Geography
Kazakhstan lays in the northern part of Central Asia. Republic of Kazakhstan has 9th rank in the world by the territory. Kazakhstan borders with Russian Federation on the north and west, Turkmenistan, Kyrgyz Republic and Uzbekistan – on the south, China – on the east. Borders also align the Caspian seashore on the southwest. The most part of country territory is lowland and low plateau set of by mountain ranges with lots of lakes and rivers on the east and south-east. The state is rich in ferrous, non-ferrous and precious metals, petroleum, coal and phosphorus.

Industry
Sectors of metal mining industry, fuel industry, and metallurgy are the most developed and are functioning for EXPORT. Chemical, light and food industry, engineering and building materials industry are well developed either and oriented to domestic market.

Agriculture
The most developed is production of grain (wheat). Main regions producing grain are northern and central provinces of Kazakhstan. Among other grain crops are rice and cotton grown on irrigated land of the south. Livestock breeding (sheep breeding, cattle breeding and horse breeding) is highly developed.