Arrival in Tashkent by international flight, passing border and passport control (about 1 hour). Meeting, welcoming tourists and transfer to hotel and check-in is after 14:00.

Breakfast is in the hotel.
08:00 – Check out the hotel and deprture to Bukhara over the Kyzylkum desert.
16:00 – Arrival in Bukhara and check in a hotel.
Overnight is in Bukhara.

Breakfast is in the hotel.
Transfer from Bukhara to Langar Ata village (320 km) in the footstep of Hissar mountains.

Get invited in one of the clay-brick houses, have tea and flat bread, and while away the afternoon on the tapchan with your new-found friends.

By desire, tourists in the village of Langar Ota can visit the White Mosque (840 y.) or as it is also called the Katta Mosque (Big Mosque). This is an active mosque that did not know the restoration, all in its original form and also guests can visit the stone tapchan with traces of “Kadamjo”.

Breakfast.
Drive to Shakhrisabz by car (70 km).
Arrival in Shakhrisabz.

16:00 – Departure to Samarkand by car through picturesque Takhtakaracha pass (1675 m above sea level) (120 km.).
18:00 – Arrival in Samarkand and accommodation at a hotel.
Overnight is in Samarkand.

City tour along Samarkand:
Gur Emir Mausoleum – Tamerlan’s tomb (14-15th c.) that was built for Temur’s grandson Muhammad-Sultan and the tombs of three other Temurids – sons of Temur – Miranshah and Shahruh and his grandson Ulugbek,
Ruhabad Mausoleum (“House of Spirit”)(external visit) – the legend says that under the dome there is a box with seven hairs of Prophet Muhammad (14th c.),  Registan Square  (“A sandy place”) – the major square of Samarkand: Ulugbeg Madrassah – Sheikh Khodja Akhrar and poet Djami were among outstanding graduates of the Madrassah (15th c.), Sher-Dor Madrassah (“Having tigers”) (17th c.), Tillya-Kari Madrassah (“Coated by gold”) – the rich gilding on the dome, walls and mihrab surpassed all other famous buildings in Central Asia (17th c.).

The architectural complex Shahi-Zinda (Alive king) – necropolis on the slope of the Afrosiab hill is connected with Kusam ibn Abbas – the cousin of Prophet Muhammad (11-15th c.). Visiting  Ulughbek’s Observatory(15th c.) and Khodja Daniil Mausoleum. Ancient settlement Afrosiyab and Afrosiyab Museum  (8th BC-13th AD). Situated in the outskirts of the city, with archeological discoveries, pottery and terracotta statuettes are on the exhibit in the Afrosiyab Museum.  Cathedral mosque Bibi-Khanym that was named after the oldest wife of Tamerlan (14th c.) and world famous Samarkand bazaar – “Siyob”.

Overnight is in Samarkand

Breakfast is in the hotel.
In the afternoon transfer to Nurata (200 km).

Excursion over Nurata:
Visit of Namzgoh mosque, ruins of the fortress of A.Makedonsky, holy source “Chashma”.

Departure to Aydarkul lake – warm lake in desert. Swimming is possible.
Arrival at yurt camp located in Kyzylkum desert.
Staying for overnight in the yurt is one of unforgettable moments of the trip.

Camel riding is in desert around the yurt camp.

Dinner is near the camp-fire accompanied by the song of nomad singer – akyn.
Overnight is in yurt.

Departure to Hayat village located on the footsteps of Nuratau mountains and just nearby the famous Nuratau National reserve.

Breakfast.
Drive to Tashkent by car (380 km).
Arrival in Tashkent and accommodation in a hotel.
Free time for the rest.
Overnight is in Tashkent.

Breakfast is the hotel.
Transfer to South-Western Tian-Shan, Charvak – Chimgan mountain area.
Meeting with the escort-trainer and start the trekking. Transport returns back to Tashkent.

Trekking to the gorge of small river Ishakkupriksaj. Climbing Charvak mountain. From it’s top you can see one of the best panoramas of the Charvak water basin and ridges of South – Western Tjan – Shanj . After simple descent trekking to hills in the area of Chimgan village. Descent to small river Chimgansaj.

Overnight is under the tents.

Trekking under Small Chimgan summit.
Trekking onto northwest slopes of mountain in small river’s Gulkamsaj gorge.Trekking through Gulkamsky canyon – one of the most beautiful places in nearby mountains.

Overnight is under the tents.

Trekking to the crest of Kyzyldzhar to Archaly pass (Н=1650 m.). Climbing Akshurang mountain (1960 m.). Descent on a crest of Kungurbuka in a small river Galvasaj valley.

Meeting with the driver.
Evening drive to Tashkent.
Arrival and accommodation in a hotel.
Overnight is in Tashkent.

END_OF_DOCUMENT_TOKEN_TO_BE_REPLACED 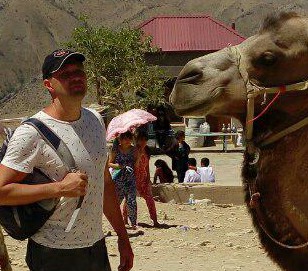