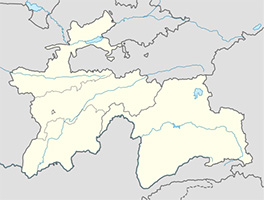 Geography
Tajikistan lays on the south-east part of Central Asia. Mountain relief dominates. Fergana Valley is situated on the north, on the northwest and in central regions -Turkestan, Zarafshanm Gyssar and Alay mountain ranges. High mountain Pamir system stretches across southeast. The territory covers 700 kms from west to east and 350 kms -from north to the south. On west and north Tajikistan borders on Uzbekistan and Kyrgyzstan, on the south and east- with China and Afghanistan.

Climate
It’s distinctly continental, temperature range – from -20°C in January to +30°C in June depending on the elevation.